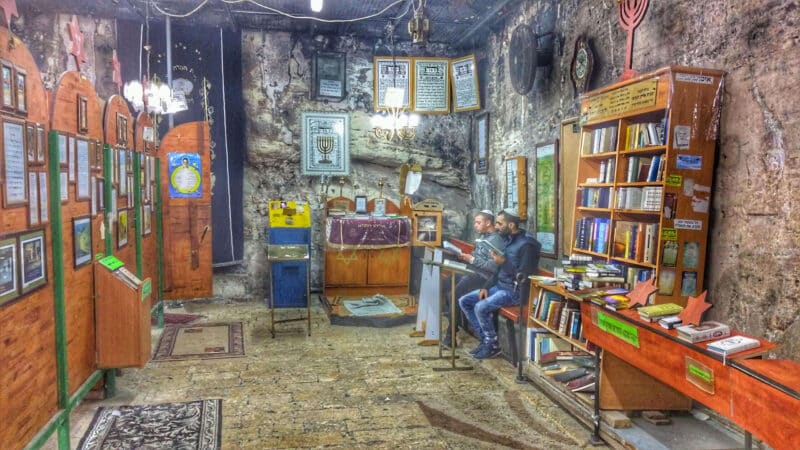 Almost hidden under the tip of mount Carmel, ‘Elijah’s Cave’ is, by a centuries’ old tradition, the place where Elijah hid from Queen Jezebel (1 Kings 19). The site is venerated since the Byznatine period, and possibly even earlier. Today, it is holy both for Jews, Christians, Muslims, and Druze. Dozens of names, written mostly in Greek, as well as two drawings of a seven-branch Menorah, attest to pilgrimage to the site in antiquity. The first historical source to mention the cave, Benjamin of Tudela, records it in the 12th century as being close to where Elijah confronted the Ba’al Prophets. By Christian tradition, Mary, Joseph, and Jesus also sheltered in this cave, upon their return from Egypt (Matthew 2).  The Muslims and the Druze associate the cave with el-Khader, the Muslim parallel figure to Elijah. In the 17th century the Carmelites tried buying the plot, but failing to do so, they settled above the cave. Associating a different cave to Elijah, they built a monastery around it, called Stella Maris.

Today, Elijah’s cave is visited mostly by religious Jews, and so it appears like a synagogue. But it is open for all, Sunday to Friday, free of charge. There is no proper parking next to the cave but is a short walk from Haifa’s National Maritime Museum. It can also be reached by foot if hiking down the beautiful path from Stella Maris. Being a holy place, visitors are expected to be dressed modestly, and men are expected to cover their heads.

A visit to Elijah’s Cave can be combined with a day tour to Caesarea and Haifa, or a day tour in the north.

Contact us to inquire more about a private tour to Elijah’s Caves: