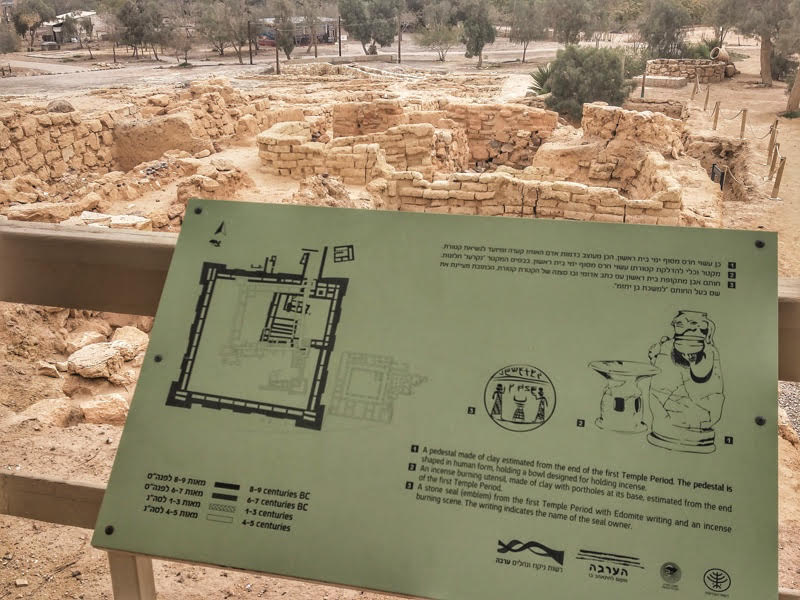 Located in the heart of the Aravah, 20 miles south of the Dead Sea, the archaeological site of Hatzeva was a fort and caravanserai built next to a rare water source in the region (Ein Hatzeva). Identified with the biblical site Tamar (1 Kings 9:17-18), Hatzeva was a Judean fort according to the bible, yet it proved to also have an Edomite shrine, whose reconstructed idols are on display at the Israel Museum.  During the Nabatean period Hatzeva was a caravanserai along the northern path of the incense route. Later it developed into a Roman fort and was part of the Roman southern security zone (The ‘Limes’). The Roman ‘Scorpion Ascent‘ connecting Hazteva with Mamshit was probably built at that time. The site at that period even had a bath house. However, by the 8th century the site was abandoned.

The site was excavated mostly in the 1980s and proved to yield many finds in six stratified layers. After some restoration the site was open for visits.

Today, ancient Hatzeva is an archaeological site. It is open for visits, free of charge. Next to the ancient spring is an old Tamarisk tree, said to be 300 years old, perhaps the oldest tree in the Aravah!

A tour of Hatzevah can be combined with a tour to the South.

Contact us to inquire more about a private tour to Hazeva: