Home  >  Places to visit in Northern Israel   >  Mount of Beatitudes 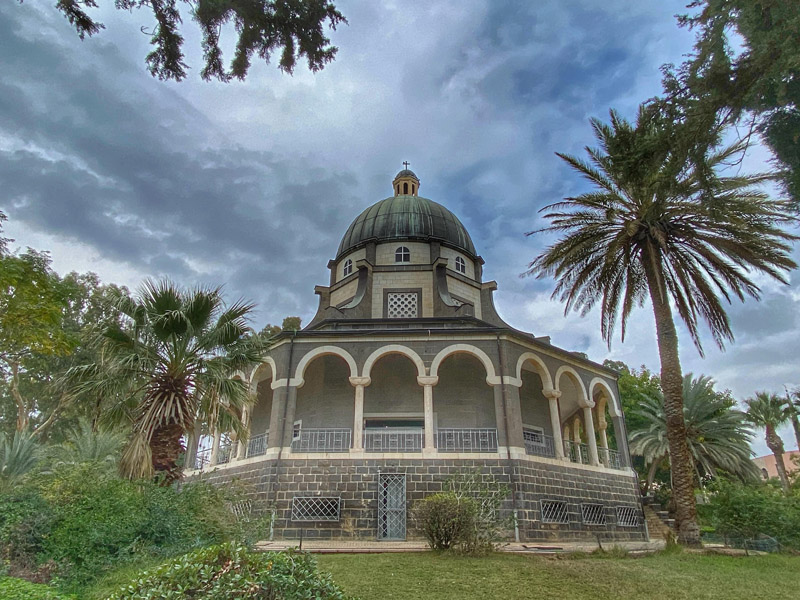 Located on hill above Capernaum and the Sea of Galilee, the Mount of Beatitudes marks, by Catholic tradition, the site of Jesus’ Sermon on the Mount (Matthee 5, Luke 6). The present-day church and gardens is a popular Christian pilgrimage destination, visited by thousands on daily basis.

Tracking the Mount of Beatitudes

The exact location of the mountain is not mentioned in the Gospels. Moreover, according to Luke the event did not take place on a mountain, but rather on “on a level place” (Luke 6:17). In the 380s, the Spanish nun Aetheria (or Egeria) who came on a pilgrim to the Holy Land, documented a cave marking the event above the site of the Multiplication of loaves and fish. Both sites were discovered through archaeological research, and both were abandoned in the Middle Ages. In the 18th century, the cartographer of Napoleon recorded a local tradition of identifying the Mount of Beatitudes at the cliff of Arbel, on the western shores of the Sea of Galilee. Other contemporaneous traditions identified the event at the Horns of Hattin, west of Tiberias.

The Modern Site of Mount of Beatitudes

In 1939 the Franciscan Sister declared identifying the Mount of Beatitudes on a hill above Capernaum. The Franciscan’s noted architect, Antonio Berluzzi, designed a striking octagonal commemoration church, at one of the most scenic viewpoints of the Sea of Galilee. In the year 2000, John Paul II delivered a mass to about 100,000 Catholics pilgrims next to the mountain. This event proves that the site can indeed accommodate large crowds. Nevertheless, this identification remains a modern era speculation.

Did Jesus Appoint His Twelve Apostles on Mount of Beatitudes as well?

The Gospels suggest that Mount of Beatitudes may have been also the place where Jesus chose his twelve disciples: “One of those days Jesus went out to a mountainside to pray, and spent the night praying to God. When morning came, he called his disciples to him and chose twelve of them…” (Luke 6:12-16. Cf. Mark 3:13). Despite the geographical clear reference, the Greek-Orthodox church marks the event to have happen in Capernaum. It is marked by the Greek-Orthodox Capernaum’s Church of the twelve Apostles.

The Church is open every day of the Week but closes for 2 hours for noon break. The entry is free but there is parking fee. Visitors are requested to dress modestly and speak softly in the church.

A tour to Mount of Beatitudes can be combined with a guided day tour of the Galilee.