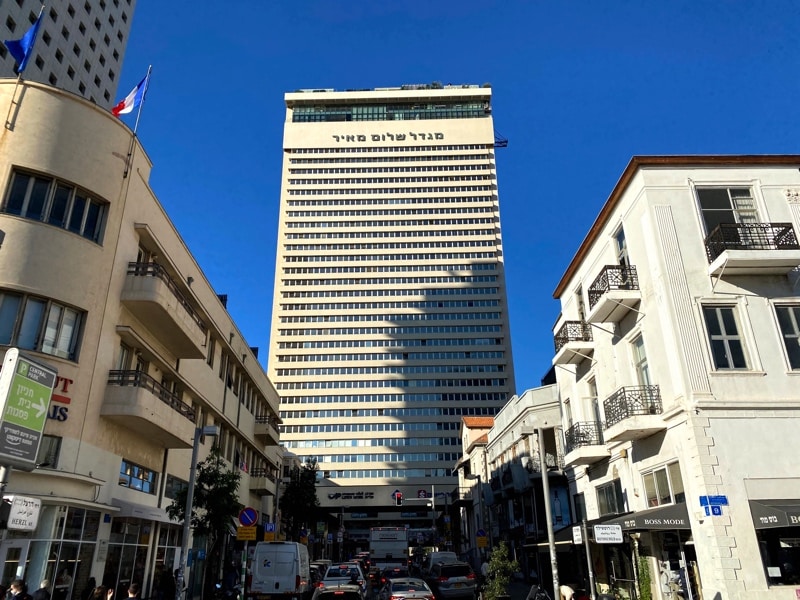 Constructed in 1965, Shalom Meir Tower was Israel’s first skyscraper, and its tallest building for over 3 decades. Nowadays, its ground floor includes a visitor center devoted to the early history of Tel-Aviv.

In 1909 about sixty Jewish families purchased a sandy plot of land northeast of Jaffa and established there a new colony – Tel-Aviv. Its main streets were Rothschild Boulevard and Herzl Street, whose northern end was marked by the colony’s school (Gimnasia Herzliyah). The school building was known for its special eclectic design, but after half a century, the building was worn out. Since the property was now very valuable, the municipality agreed to demolish the school and replace it with a new and modern tall building, the first skyscraper in Tel-Aviv. Completed in 1965, the Shalom Meir Tower indeed changed the skyline of Tel-Aviv. Being 120 meters high, it was not only the tallest building in Tel-Aviv, but in the whole Middle East. Since then, quite a few more high-rise buildings were added to  Tel-Aviv skyline, and Migdal Shalom, as the locals call it, lost its fame. Today, Shalom Meir Tower’s ground floor hosts several exhibitions, all devoted to Tel-Aviv’s early history.

The Shalom Tower’s visitor center is easily accessed and is free of charge. Its ground floor presents several exhibitions – 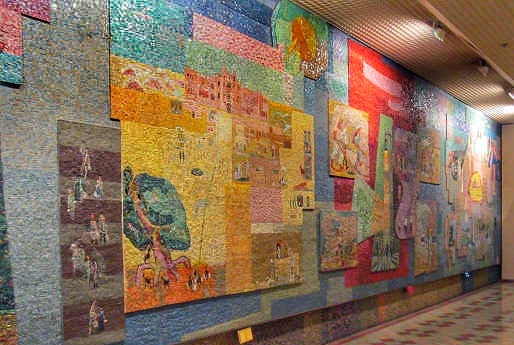 Nahum Gutman Mosaic Wall – A large scale mosaic artwork by Tel-Aviv’s renowned artist, Nahum Gutman, presents the history of Tel-Aviv in four panel, from its inception, and up to 1970s. In romantic naïve style the artist follows the city development, from a colony set in a sand dune, to a modern metropolis.  Another mosaic wall, by David Sharir, was later added on the opposite wall, complementing Gutman’s work with more details of early Tel-Aviv, and Jaffa.

Tel-Aviv’s First Streetlamp – Next to the model is the actual first streetlamp of Tel-Aviv, first operated by kerosene, and later by electricity. The residents of early Tel-Aviv took great pride by having this streetlamp, the first of its kind in all of Palestine. 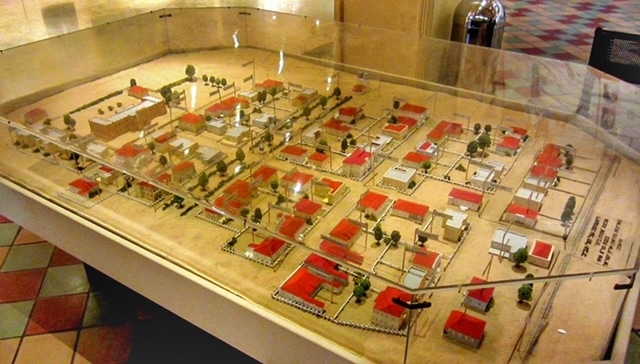 Early Tel-Aviv City Model – A model of Tel-Aviv, when it was about a decade old, presents its original buildings in detail, including its lost historical school building (its image became the logo of Israel’s society for preservation of historical sites).

Early Tel-Aviv Photographic Collection – A the vast display of black and white photos captures beautifully moments of the Tel-Aviv’s daily life in its early years. Bathers posing at the beach, a donkey-driven carriage selling ice blocks, Purim festivals (Adlyada) and Maccabiah games are just some of the subjects featured in this fascinating exhibition.

The Migdal Shalom Visitor Center is a great experience for anyone wishing to learn in detail about the establishment of Israel’s first Hebrew city, Tel-Aviv.

A tour of Shalom Meir Tower Visitor Center can be combined with a guided day tour of Jaffa and Tel-Aviv.

Contact us to inquire more about a private tour Jaffa and Tel-Aviv: