Set in the heart of the Negev desert, about 37 miles south of Beer-Sheva, Shivta was a prosperous town in late antiquity. It was founded by the Nabateans as a caravanserai along the famed ‘Incense Route‘, between Avdat and Haluza.

The Incense Route and the Negev

The ‘Incense Route’ was a network of ancient roads that enabled transferring precious spices and perfumes across the Arabian Peninsula to the Mediterranean coast. The full length and exact path of the Incense Route is still not fully known. It began somewhere in Yemen, passed through Mecca, Medina, Petra, and ended in the ports of Gaza and El-Arish. The path from Petra to the Mediterranean coast is better documented. It passed the Aravah and the traversed through the heart of the Negev, including a difficult cross of the Ramon Crater. Today, the route and its related archaeological sites are UNESCO World Heritage Sites. 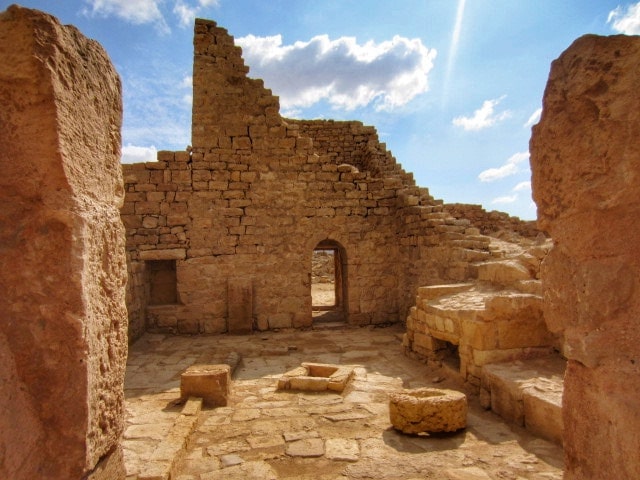 Later, in Roman and Byzantine periods, Shivta had a combined population of farmers and a military force that guarded the Roman southern security zone (the ‘Limes’). Following the Muslim conquest of the region, Shivta had a Muslim community settling in it. They built a mosque next to the city’s central church, and used a lintel engraved with a cross at its entrance. By the 9th century CE Shivta was abandoned, and later even its location was forgotten. Rediscovered in the 19th century, Shivta was excavated by several expeditions, and then developed for tourism. It is one of the best-preserved sites from the Byzantine period, with some of its walls standing to the second floor. Walking in its alleys, it feels like it residents left it only yesterday, although it was abandoned about 1,200 years ago.

Shivta is a national park. It is open every day of the week and there is an admission fee. The state of the site’s preservation is exceptional and includes cobbled streets, three churches, and an elaborate water system.

A visit to the site can be also combined with an off-road day tour along the ‘Incense Route’.

Contact us to inquire more about a private tour to Shivta: