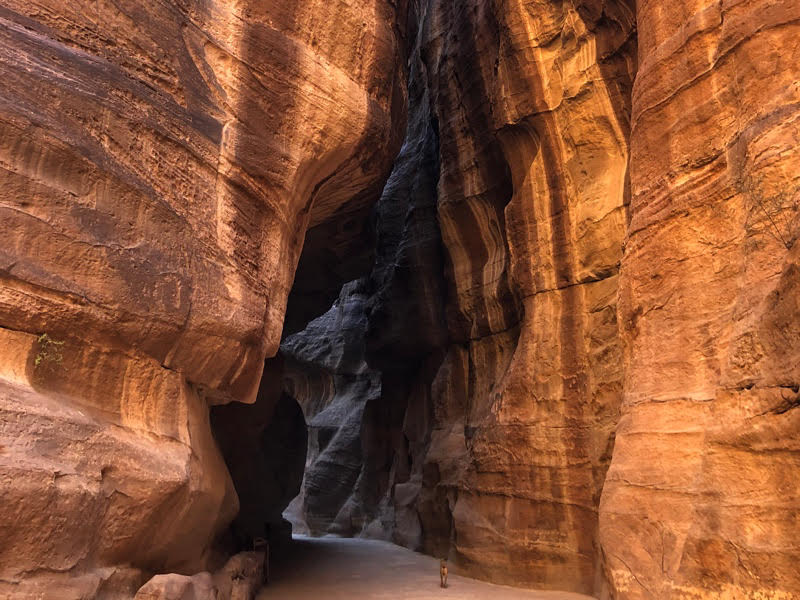 A major component of Petra’s magical tour experience is its stunning entryway. Known as ‘The Siq’ (The canyon), the path is almost a mile-long narrow passage between towering walls, up to 260 feet high. The Siq was formed by a tectonic split that was later smoothed by flash floods. The path leasing to the Siq is adorned by several Nabatean tomb facades and funerary inscriptions. At its starting point are remains of a Roman triumphal arch, that survived until 1896. Along the path the Nabateans carved several votive niches (betyls), with abstract representations of their chief deities, Dushara and al-Uzza. There are also several dedicatory inscriptions, and remains of a big-sized relief depicting a caravan of camels entering Petra. Through most of the siq Petra’s aqueduct is still visible, including sections with terracotta pipes. The water was channeled from springs in the east such as Ayn Musa. The Siq ends in front of Petra’s iconic monument – The Treasury, which leads into the city itself.

The (overpriced) admission fee to Petra includes the walk along the Siq. The ticket also includes a horse ride to its starting point but take into account the horseman will expect a generous tip. At the end of touring Petra, the Siq is also the way out of the site. If warn out, it is possible to order a decorated donkey-driven carriage back to entry point, at the cost of JD50.