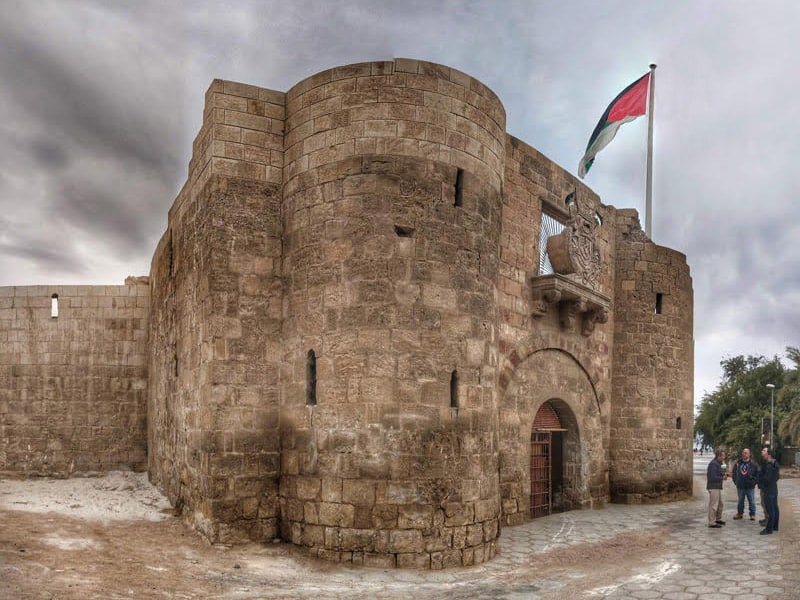 Adjacent to Eilat and facing the Red Sea, Aqaba is Jordan’s single seaport, and thus plays a major role in the country’s commerce. It is also a great tour destination, combining archaeological sites, some fine hotels, and great scuba diving destinations. A tour of Aqaba can also be combined with a tour to Wadi Rum and the famous ancient city of Petra.

History and Archaeology of Aqaba

Named Eilat or Ezion Gaber in the bible, the city was controlled by the Edomites and King Solomon. In the late Roman period, the tenth ‘Fretensis’ legion was stationed in the city, which was then named ‘Aila’. The city was also inhabited in the Byzantine and Muslims periods. In Muslim times it became an important station along the pilgrimage routes to Mecca. The Arabs gave the city the name ‘Aqaba’, abbreviation of  ‘Aqabat Aila’ (“the Aila pass”). In 1917, the Ottoman outpost of Aqaba was captured by Bedouin mounted on camels. Consulted by T.E. Lawrence (‘Lawrence of Arabia’) this successful attack ignited the ‘Great Arab Revolt’, which expelled the Ottomans from this region and led to the formation of modern-day Arab states.

Aqaba’s main historical attractions include remains of a church from early Byzantine Period, foundation of an Umayyad era, and a Mamluk era fort. Next to the fort a colossal-size flag commemorates the Great Arab Revolt, which also led to the Hashemite Kingdom of Jordan. Aqaba also attracts local Jordanians to vacation and shop as it is a reduced tax shopping zone. Its streets are full of vendors offering mostly low-cost imported goods, but also some good and authentic Jordanian cuisine. Make sure to visit a local sweets bakery and try Knafeh, with great local Jordanian coffee. South of the city, Aqaba Marine park is stretched along 5 miles, and offers great snorkeling and scuba-diving locations.

A tour of Aqaba can be combined with a tour to Petra and Wadi Rum, or a multi-day tour of Jordan.