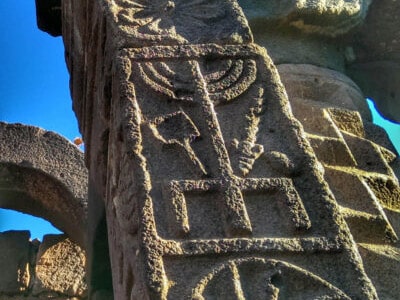 Umm el-Kanatir (in Arabic: Mother of the Arches), is an archaeological site on the western slopes of the Golan Heights, about 30 miles east of Tiberias. Excavations at the site proved it was a Jewish prosperous village in the Byzantine period, yet abandoned after earthquake of 749CE.

Its elaborate ancient synagogue, now fully restored, is the best-preserved example of synagogues in the Golan Heights from the time of the Talmud.

History and Archaeology of Umm El-Kanaitr

The ruins of an ancient synagogue in Umm el-Kanatir were recorded already in 1884, but only on the turn of the 21st century it was excavated and then restored in its entirety.

Restoring the ancient synagogue of Umm el-Kanatir was done by an innovative process of planting a RFID chip into every stone, and then, with a crane, each stone was removed and later inserted to its original location. This painstaking project took 15 years, and was completed in 2018.

The excavations indicated that the site was settled in the Roman period by pagans but later it became a Jewish village. Its economy was based washing and whitening flax, which was done at the at its southern end, next to a spring. The excavations did not yield any evidence attesting to the site’s name in antiquity. Its official modern Hebrew name is Ein Keshatot – the spring of the arches.

The site is reached a 1-mile long road around Natur (road 808). It is open during the week, and there is an admission fee.

A tour of the site can be combined with multi-day tour in Israel that will include exploring the Golan Heights.

Umm el-Kanatir can also be a unique location for a Bar/Bat-Mitzvah ceremony. Reading the Torah inside a fully restored 1,400-year-old synagogue is undoubtfully a very special and spiritual experience. The site is open year-round and welcomes Jewish families of all denominations to celebrate here their special event.