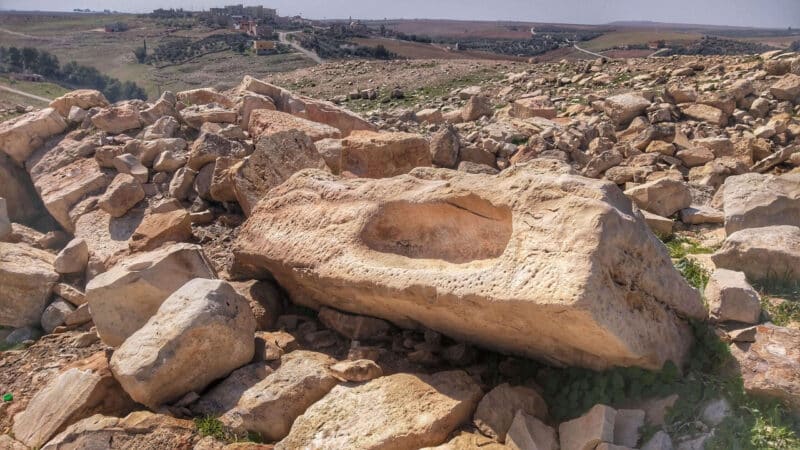 Set in the ‘Mishor’ along the Kings highway, about 45 miles south of Amman, Dibon was an Israelite city and later the capital of the Moabites. Today, Tel Dhiban is an archaeological site, adjacent to Dhiban village.

History and Archaeology of biblical Dibon

According to the bible, Dibon was one of the stations of the Israelites during their exodus (Numbers 33:45) and later part of the lot of Gad’s tribe (Number 32:3; Joshua 13:9).  During the 9th Century BCE Dibon became the capital of the Moabites, and its Moabite king Mesha led a successful rebellion against the Israelites (II Kings 3). However, by the 8th century BCE both the Israelites and the Moabites were subdued to the Assyrians. Dibon was finally conquered and abandoned in 582 BCE. In 1868 a black basalt stele, 44-inch high, was found in Dibon, which proved to be a decree of king Mesha. Known as the ‘Moabite Stone’, its 34-lines inscription describes in detail Mesha’s battles against the Israelites and his development Moabite cities, pleasing the chief Moabite god, Kemosh. This stele is one of the most important archaeological discoveries from biblical times. Unfortunately, shortly after its discovery the stele was smashed by the local Bedouins, yet it was later pieced together and shipped to France. Today, it is on display at the Louvre Museum in France. Excavations in the 1950s proved that Dibon was also settled in later periods. A Byzantine-era church was found near a temple from Roman times which was built over a Nabatean temple. Both were perhaps built over a former Moabite High-place dedicated to Kemosh.

The site is accessible and free of charge. Unfortunately, despite its biblical significance, there is little that can be seen on the surface. There are also no marked trails or any signs at the site.

A tour of Dibon / Tell Dhiban can be combined with a multi-day tour of Jordan.