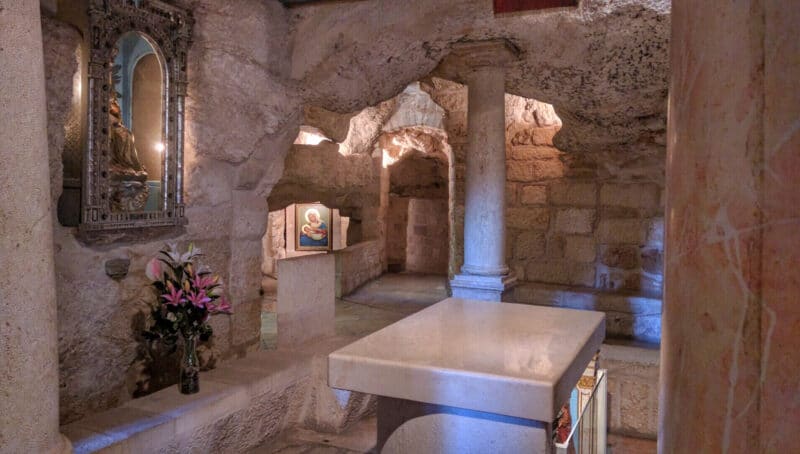 Located in an alley 500 feet away from the Church of Nativity the Milk Grotto marks by local tradition the place where Mary Joseph and baby Jesus hid after his birth. Furthermore, while taking refuge in the cave Mary breast fed Jesus. A drop of her milk dropping on the floor turned the interior of the cave white. Although this event is not documented in the New Testament, the milk grotto is a popular pilgrimage destination, venerated since the 4th century. Ancient sources record pilgrims chipping pieces of the cave’s interior to cherish as sacred souvenirs, and some sent to churches across the Byzantine Empire. In 1872 the Franciscans erected a church inside the irregular shaped cave, which was further developed in 2007. By centuries old tradition, Christian and even Muslim women who want to conceive visit the cave and pray for Mary. Some will scrape off the Cave’s whitish chalk and put it under their pillow. Women who breastfeed will also dissolve the white powder in water and drink it.

A visit to the Milk Grotto can be combined with a tour of Bethlehem.

Contact us to inquire more about a private tour that will include a visit to the Milk Grotto: