The tomb of Nebi Shu’ayb is a grand complex in the lower Galilee, some 5 miles east of Tiberias. By Muslim and Druze belief, it is the burial site of Jethro, the father-in-law of Moses. The complex is maintained by the Druze, who consider it as the most sacred Druze site in Israel.

History of Nebi Shu’ayb and his Tomb 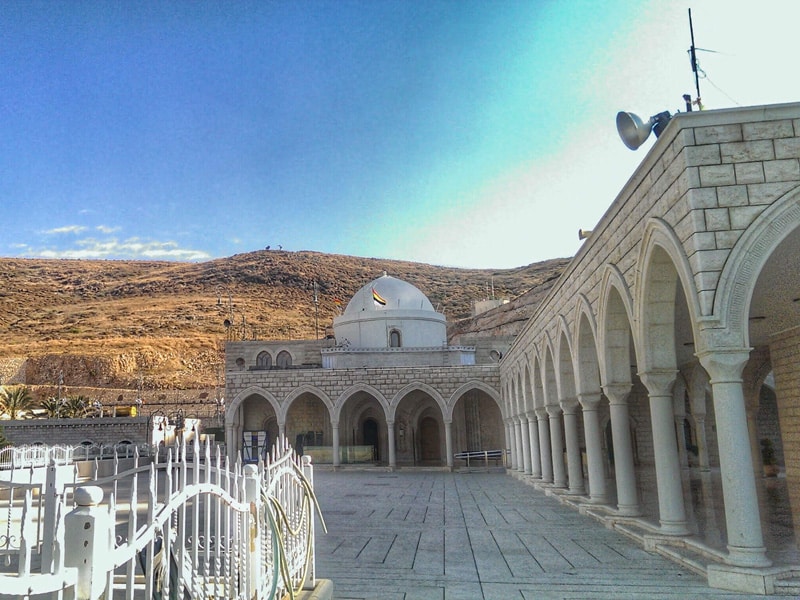 Shu’ayb is one of the main prophets in Islam, and the chief prophet in Druze religion. He is often paralleled with Jethro, Moses’ father-in-law, who was the first non-Israelite to accept their God (Exodus 18).  By local tradition, towards the end of his life, Shu’ayb took refuge in a cave in the Galilee, next to a spring. Centuries later, after defeating the Crusaders at the hill of Horns of Hattin, Saladin was the first to build a shrine over his tomb, which was near the battle site. In the 1880s, the Druze raised money and formed a new sepulchre over the tomb. Following the establishment of the State of Israel, the Druze were granted with exclusive custody over the tomb. Over the years they have enlarged it several times, to a grand complex. The site is a major Druze pilgrimage destination, and especially during their annual festivals at the site, between April 25th and 28th.

Touring the Tomb of Nebi Shu’ayb

The grand scale complex, built entirely in white stone, is awe-inspiring. The Druze representatives are welcoming and happy to answer questions. The tomb itself, open to all, is rather humble. It is seen in silence, in bare feet, and no photos of it are allowed. By local tradition, an imprint of Shu’ayb’s left foot is place next to the tomb. Druze pilgrims pour oil into the imprint and then revere it as holy oil.

A visit to the tomb of Nebi Shu’ayb can be combined with a guided day tour of the Galilee.

Contact us to inquire more about a private tour of the Galilee: