Home  >  Places to visit in Jerusalem   >  The Via Dolorosa

The Via Dolorosa is the Latin phrase for the “way of suffering” or “way of grief”. It is the path Jesus took from the location of his trial (the Praetorium) to the site of his execution (the Golgotha). It is one of the most sacred and significant paths in Jerusalem, and in the Christendom.

How the Via Dolorosa Developed

The New Testament records Jesus’ trial taking place in Jerusalem’s Praetorium, however its location is uncertain. In the Byzantine period, it was identified at Herod’s former palace, next to Jaffa Gate. Interestingly, in Crusaders’ times, an alternative location was promoted – the Antonia fortress, built at the northern end of the Temple Mount. Being so, the Crusaders processions began at the area of the Antonia, continued through the Temple Mount itself, and ended at the Golgotha (inside the Church of the Holy Sepulchre). After the expulsion of the Crusaders, Christians could no longer conduct processions on the Temple Mount. An alternative route, along the city streets, was establishing instead, with “stations” marking the events Jesus supposedly encountered when walked on this path. That is also why the path’s name in English is “Stations of the Cross”.

And How Many Stations Are There?

Exploring the Stations of the Cross

These are the current stations along the Via Dolorosa, their location, and what each one represents:

The First Station commemorates Jesus’ trial (Luke 23). It is marked at the Umryia Muslim boys’ school, which is at an elevated area at the northern end of the Temple Mount. The surface does not bear any remains from antiquity, but outside one of its windows is one the best views of the Temple Mount and the Dome of the Rock. 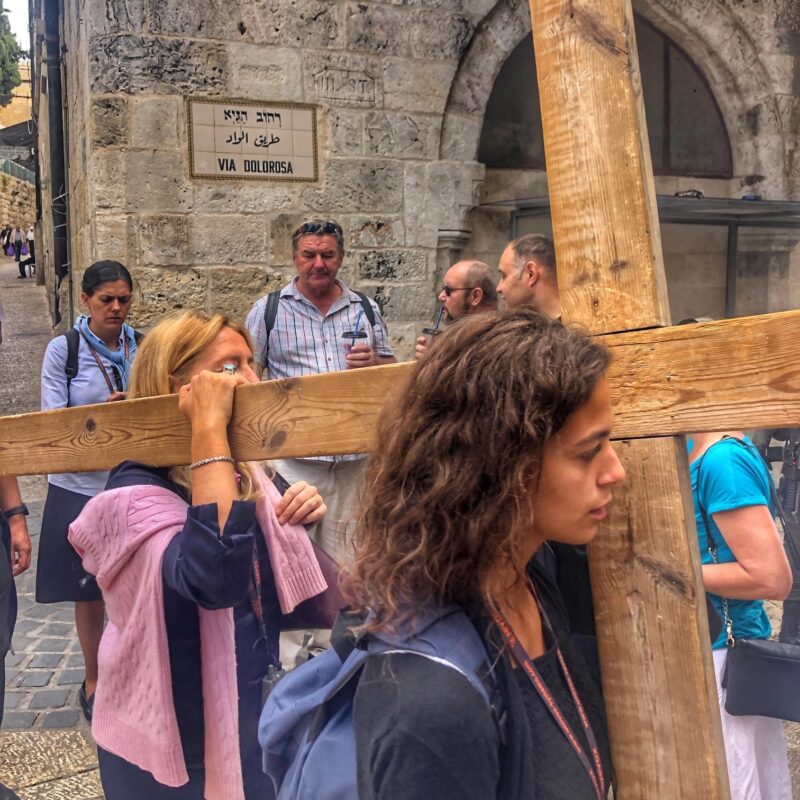 The Second Station commemorates the condemnation of Jesus, his flagellation, and the imposition of the cross (Matthew 27:25, John 19:17). It is marked in two chapels within a Catholic compound, opposite the Muslim boys’ school. The chapel on the eastern side was completed in 1929. It marks the condemnation of Jesus and his flagellation. The second chapel commemorates the imposition of the cross. Its floor bears a few large flagstones from Roman times. By local tradition, they are part of the Lithostrotos, the stone pavement where Jesus was introduced to the crowds at the end of his trial (John 19:13). On one of the stones, a gameboard from Roman times can still be seen. Another local tradition maintains that in the 4th century, Empress Helena found here the stairs on which Jesus was taken out of the Praetorium. These stairs were pulled out by her order, sent to Rome, and are kept to this day in a church in Rome called Scala Sancta. However, recent study of the stairs indicated they could not have come from first century Jerusalem.

30 meters west of the Second Station, above the street, hovers part of a Roman triumphal arch. Known as the Ecce Homo Arch, by local tradition, it was part of the Praetorium, and where Jesus was introduced to the crowds at the end of his trial John 19:5). Next to it, is a Greek-Orthodox monastery, suggesting an alternative location for the Praetorium. They also present a cave under the monastery as the prison of Christ.

Where Was the Trial of Jesus?

The Gospels record Jesus’ trial taking place in the city’s Praetorium, yet its location is not given, nor is it mentioned in any other contemporaneous sources. In the Byzantine period, the trial was identified taking place in King Herod’s former palace, whose remains were found in the Kishle excavations. However, in Crusaders times, the trial spot was relocated to the former Antonia Fortress, whose remains were found north of the Temple Mount. Today, most scholars believe the Crusaders tradition is false, and therefore so is the path of the Via Dolorosa. However, there is a strong argument in favor of setting the trial at the Antonia Fortress.

The Antonia Fortress was built by King Herod at the corner of the Temple Mount, and for a good reason. It enabled the king to monitor the Jewish crowds assembling on the Temple Mount, especially on their holidays, and intercept any gatherings that threatened his throne.

Jesus’ trial was held on the Jewish holiday of Passover. It makes sense that Pilate, the Roman governor, would also prefer to be stationed at the Antonia Fortress during the holiday, and for the same purpose. And while being there, he could have conducted trials.

At the corner of Via Dolorosa Street and the Hagay Street a few more large pavement stones from Roman times can be seen. Next to them, is a chapel marking the Third Station, the “fall of Jesus from the weight of the Cross.” Since the 7th and 9th stations mark a similar event, the 3rd station is also called “The First Fall of Jesus.” The falls of Jesus from the weight of the cross are not mentioned in the Gospels and are only known in Catholic tradition. The chapel is maintained by the Armenian Catholic Church, but it was renovated by Polish soldiers stationed in Palestine in the Second World War. Being so, the Polish rooster and other polish imagery appear in the chapel’s ceiling.

The Fourth Station is located right next to the 3rd station. It commemorates where Mary, mother of Jesus, saw her son carrying the cross. This event is also only known in the Catholic Church. The church commemorating the event is called the Church of Saint Mary of the Agony. An ancient mosaic floor found in its basement bears an image of two sandals. By local tradition, it is a Byzantine period mark of where Mary stood, proof that the veneration of Mary at this location is centuries old. However, archaeological parallels suggest a less holy context. Images of sandals in a round frame embedded in ancient mosaic floors usually indicate where to take the sandals off before entering a bath house.

The Fifth Station is at the junction of Hagay Street and the western stretch of Via Dolorosa Street. The small chapel here marks where Simone of Cyrene helps Jesus carry the cross (Luke 23:26). There are no finds from the Roman period at the spot, but an indention in the chapel’s wall is said to have formed after Jesus leaned against it.

The Sixth Station is about 50 meters west of the 5th station. A small Roman pillar set in the wall along the street is the oldest mark of the spot. A Latin inscription engraved in it reads “6ST / PIA VERONICA FACIEM CHRISTI LINTEO DETERCI” – 6th station / [where] pious Veronica the face of Christ with a veil [she] wiped. By Catholic tradition, the 6th station marks the home of a woman called Veronica. Seeing Jesus walking by, bleeding and sweating as he was carrying his cross, she came out and wiped his sweat off his face. This event is also not documented in the Gospels and is viewed as another Catholic tradition. Nevertheless, the supposed veil used by Veronica became a relic and was presented in Constantinople in Antiquity.

The Seventh Station is at the T junction Beit-Habad Street and Via Dolorosa Street. The chapel here marks, by Catholic tradition, Jesus’ second fall from the weight of the cross. A large pillar still set on its base inside the chapel is said to mark the exact place of the fall, outside city walls. Archaeologists believe that the pillar is actually a remnant of the western colonnade along Jerusalem’s main avenue in the late Roman period, the Cardo Maximus.

A small mark in the wall along al-Hannakah street, 15 meters west of the 7th station marks The Eighth Station. It bears a short Greek Inscription reading IC XC / NIKA. By local tradition, this is the place where Jesus encountered women who grieved on his death sentence (Luke 23:27-31).

A Roman pillar attached to the wall next to the Saint Anthony Coptic Orthodox church is marks The Ninth Station. Here, by Catholic tradition, Jesus fell for the third time from the weight of the cross.

Navigating from the 8th to the 9th station is a bit tricky. Walk back to the 7th station, turn right, and walk through the narrow and crowded part of Beit-Habad Street, about 50 meters. On the right side, you will see an alley that continues as a flight of steps to a higher floor. This path will lead you around the Nevsky Church and the Ethiopian compound to the 9th station. From the 9th station, continue walking through two Ethiopion chapels, and you will find yourself at the main entry to the Church of the Holy Sepulchre. 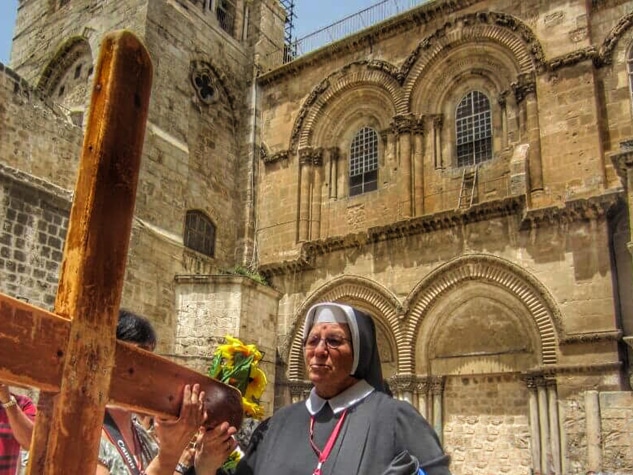 On the right side of the main entrance to the Church of the Holy Sepulchre, is another Roman pillar attached to a wall, in front of a flight of stairs. This pillar marks The Tenth Station, where Jesus was stripped of his clothes (John 19:23).

The 11th to 14th stations are all inside the Church of the Holy Sepulchre. The Eleventh Station is the chapel on the right side of the Golgotha. It marks where Jesus was hammered to the Cross. The Golgotha, the site of Jesus’ crucifixion is The Twelfth Station. The altar with a bust of Mary on its right end marks The Thirteenth Station, where Mary watched in great agony her son’s death. The Tomb of Jesus is The Fourteenth Station. It marks the site of Jesus’ burial, and resurrection.

Touring the Via Dolorosa 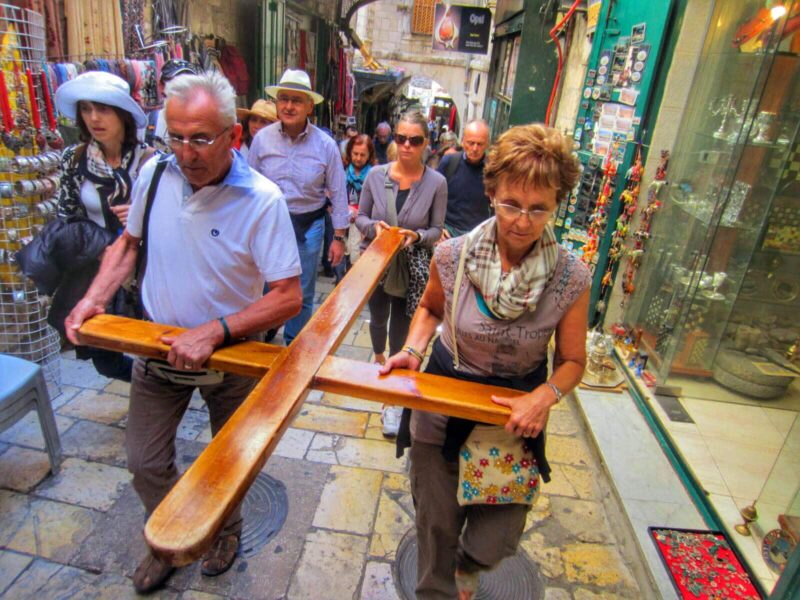 All of the sacred stations along the Via Dolorosa are marked by metal round plates. Each plate presents the number of the station, in Latin letters. In 2019, small sculpted images of the events were set next to the metal plates. Some of the chapels along the holy path are open on a daily basis, while others are open on an irregular basis. The first station is only accessible only on Friday afternoons, however, special arrangements can be made to also access it also during the week (i.e. bakshish to the guard). MANY souvenir shops are lined up along this sacred path, and especially between the first and the seventh station. They offer MANY original souvenirs, yet there is a good chance that they are originally made in china. There are also a few local culinary experiences worth considering while exploring the Via Dolorosa. The two best hummus places are Hummus Abu Shukri, opposite the 5th station, and Hummus Lina near the 8th station. The new knafeh stand near the 4th station is a great option for a coffee and knafeh break.

For full appreciation of the Via Dolorosa and its sites, it is recommended to have a guided day tour of Jerusalem.

Contact us to inquire more about a private tour along the “Via Dolorosa”: