Nestling on the western slopes of the lower Galilee mountain range, Nazareth was a small village in antiquity. Despite having a good view from its southern edge of the important roads in the Jezreel valley, Nazareth never developed as a strategic military site. The Old Testament does not even mention Nazareth, nor does Josephus, the 1st century CE Jewish historian. It is especially surprising as Josephus does provide a detailed description of the geography of the Galilee, and mentions 45 other sites in the area. But events that took place in Nazareth during the days of Josephus changed the history of the Nazareth, and all of man kind.

According to the New Testament, Nazareth was the home of Joseph and Mary, and in Nazareth Mary was conceived by the holy spirit. Jesus was born in Bethlehem but was raised in Nazareth. After his baptism, and temporary retreat to the wilderness, Jesus returned to Nazareth, but was rejected when preaching about his messianic role. Jesus left Nazareth for good, and settled in a small fishing village by the Sea of Galilee named Capernaum. But the name of Nazareth was still attached to him. When he was crucified, in Jerusalem, the Romans fixed a sign to his cross, inscribed “Jesus of Nazareth, king of the Jews”.

In the early 4th century CE Nazareth is still described as “a small village of Jews”, but with the growth of Christianity , Nazareth developed as a Christian center as well. Nazareth was probably destroyed during the Persian invasion in 614 CE. The Muslims, who conquered the land shortly after (636-640 CE), left Nazareth in ruins. The city enjoyed a revival under the Crusaders. In the 12th century Nazareth became the headquarters of the Archbishop of the Galilee. The crusaders began constructing a grand church over the home of Joseph and Mary, the church of the Annunciation. But the church was apparently never completed. In 1263 CE the Muslims conquered Nazareth again, expelling the Crusaders from the city. Only in the 17th century Franciscan monks were allowed to dwell among the ruins of the Crusaders church. Later they were given permission to rebuild the church, but only within a period of six months (the time it takes a Muslim to make pilgrimage to Mecca). The result was a modest church building, in a Baroque style.

The New Church of the Annunciation

In 1954 that church was removed for a new grand church design, which would be the largest church in the Mediterranean.  Along the construction, the Franciscans conducted excavations in the area of the sanctified house. They found the remains of the Crusader period basilica, and the remains of a 4th century church. Below them, at rock level, domestic agricultural installations attested to the agrarian nature of the village in which Jesus grew up. Some of the finds made in these excavations are presented today in a humble museum near the church. 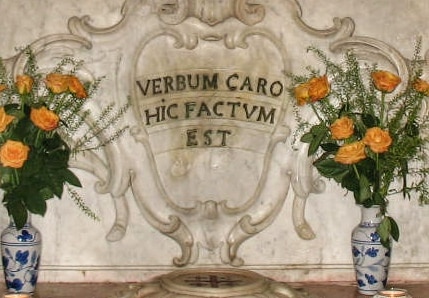 The focal point of the church is the cave below the main hall. The place has been identified as a cellar and kitchen of the original house of Mary. It is here, according to local Christian tradition, that the angel appeared to Mary and announced that she would concieve Jesus. On the floor of the cave a Latin inscription reads  – VERBUM CARO HIC FACTVM EST (English for Here the word became flesh). The conic-shaped dome above the cave is large and impressive. It’s interior is shaped like a lily, the symbol of Mary.  The apse of the church is adorned with a large mosaic wall, considered to be one of the biggest mosaic walls in the world. In addition, the walls of the church and its courtyard are decorated with more then 100 works of art, icons donated by different countries. Most of the icons depict Mary and Jesus as baby, in many different styles.

Modern Nazareth is an Arab speaking city of some 80,000 residents. Most of its popuation is Muslim. The Christian are less then a quarter, and no Jews live in the city. Aside its Christian pilgrimage destinations, Nazareth is also known for its Arab restaurants and cafes, offering some of the best dishes in the Arab kitchen. Nazareth’s main tour attractions are:

Church of the Annunciation: Many will consider this to be Nazareth’s main attraction. Completed in 1969, this collosal size church is by centuries’ old tradition marking the site where Mary was announced she will concieve Jesus.

The Church of Saint Joseph: 50 meters north of the church of the Annunciation is another church, dedicated to Joseph, foster-father of Jesus. By local tradition the carpentry shop of Joseph was here, as well as the his home. Excavations at the site uncovered an ancient underground storage area with silos, a room for ceremonial washing, and a water cistern. These finds, all relating to the childhood of Jesus, can be seen today in the crypt of the church, around an altar of marble.

The Synagogue Church: Many consider the ancient synagogue of Nazareth to be the place where the seeds of Christianity were planted. It was here that through his studies Jesus gained knowledge in the Scriptures, and shaped his own beliefs. Moreover, after his baptism, Jesus preached for the first time about his messianic destiny in the Synagogue of Nazareth. That synagogue is identified in Nazareth’s old city market, and is maintained by a Greek Catholic order.

Sisters of Nazareth Archaeological Site: Just opposite the entrance to the Church of annunciation is a Catholic convent called the Sisters of Nazareth. It is a private property, but if arranged in advance, it is possible to visit their basement, where various archaeological finds were made. The most peculiar find is an ancient tomb, cut in the rock. By local tradition, this is the tomb of Saint Joseph, the foster-father of Jesus. While there is no way of validating this, it can be said that this tomb is from the Roman period.

Mary of Nazareth International Center: Another significant site just next to the Basilica of the Annunciation was opened only in 2011. Prior to its construction, archaeological salvage excavations uncovered clear evidence of inhabitation from the first century. The finds are not impressive, but are significant, as they prove the settlement of this area in the time of Jesus. 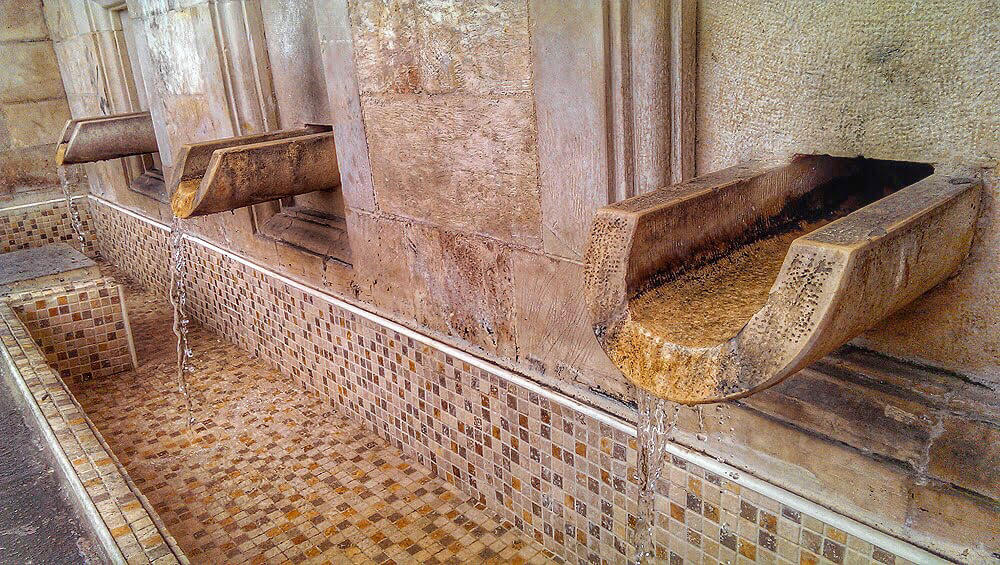 Nazareth Village: Being a modern an important city, Nazareth was rapidly built, especially in the last 70 years. It is quite difficult to imagine how Nazareth may have looked like in the time of Jesus, yet there is a theme park in the city, called “Nazareth Village“, which is devoted exactly to this purpose. The park presents architecture, agriculture and daily life in the rural part of the Galilee some 2,000 years, including adult and children actors dressed in Roman provincial style.

Mount of Precipice: A steep hill on the southern edge of Nazareth provides stunning views of the Jezreel valley. By local Christian tradition, this is where the people of Nazareth tried throwing Jesus to his death, antagonizing his messianic claims. At the other end of the Jezreel valley, one can see from here Megiddo, a major city in Canaanite and Israelite times. Christianity equates Megiddo with the apocalyptic site of Armageddon. This links Nazareth, the cradle of Christianity, to Armageddon and the end of times.

A tour of Nazareth can be combined with a day tour in the north.